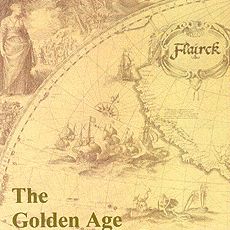 Flairck in the Golden Age: a music theatre production inspired by the eyewitness report of the horrific sinking of one of the United East India Company's biggest ships. The wealth and poverty of the Golden Age, the foundations upon which this enterprise, the first of the multinationals, was built, are reflected in life on board ship. The cramped conditions on the long voyages heightened the contrast between rich and poor, rulers and ruled. When the crew is washed up on a desert island following a shipwreck, however, suddenly a different order prevails: power to the strong. The balance of power is not straightened out until East India Company ships appear on the horizon.
An alternation of light-hearted and serious episodes, drama and farce, culminates in the loss of the ship and its hierarchy.

Flairck, augmented to form a bizarre 'Orchestra of the Golden Age', present the story as an operatic spectacle. Unlike many of their previous productions, there is a good deal of singing in this one, for which the Polish-Dutch singer Natalia Rogalski has been engaged. With a mixture of 17th-century and new lyrics, compositions and instruments, we are guaranteed a wealth of musical styles, ranging from sea shanties to compositions by the 17th-century Rhetoricians, from minuets to "wooden-leg' dances.

The Golden Age" is set in 17th-century Holland, on board a ship and on an island in the Indian Ocean. The gigantic sail let down from the tall mast on stage is also used for videos and slides of stormy weather and art from the Golden Age.

With this production Flairck are making a clear effort to show aspects of Dutch history and culture to audiences at home and abroad.