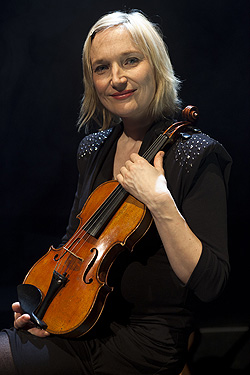 Violinist and singer Mirella Pirskanen was born in 1973 in Finland.
She lived in Sweden for 10 years and studied violin and jazz singing at the conservatory of Malmö.
She developed her own musical style and is now a musician who sings and plays the violin, often simultaneously. She composes and arranges her own material, which is inspired by Nordic roots and Finnish and Scandinavian traditional music, but also contains elements of contemporary classical music and improvisational music.
In 1999 she moved to Amsterdam, and was invited to play a leading part (the ‘solist from the North’) in the Flairck production “Symphony for the Old World”.
From 2001 untill 2003 she joined the band of Holiday on Ice, touring the U.K, Germany, Holland, Greece, Belgium and DenmarkFrom 2003 untill 2006 she was a (founding) member of the acrobatic dance theater Bencha Theater, co-composing and performing the music for the performances 'Katoembar' (2004) and 'Flying Object' (2005), playing the violin while hanging in the air and performing acrobatics.In 2006, 2007 and 2008 she joined the seven men band of the Cirque du Soleil show ‘Dralion”, touring Europe and Japan for 26 months, playing over 500 shows. She recently re-joined Flairck and she also performes a solo production called Vio Voce.