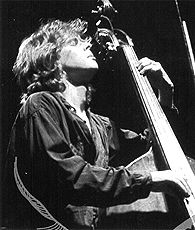 Thomas received his first piano lessons from the piano tuner at the age of six. At eight he also took up the clarinet and five years later the alto saxophone. Attracted by a chance offer he acquired a bass guitar at fourteen. Drawing inspiration from Mark King and Stanley Clarke, he began to take matters seriously. He started bass lessons at the preparatory school of Twente conservatory, and two years later he was admitted to the professional training. A master class thought by bassist Gary Karr was one of the incentives that finaly made him decide upon the classical education. He went to the Royal Conservatory in The Hague, where he studied with Knut Guettler and Quirijn van Regteren Alteno.
During the long summer of 1988 he once more took up the saxophone and in the next four years he found himself not only standing behind the bass, but also among the horn section of the Leiden funk and soul band Capital Swing. Before graduating from the Royal Conservatory in 1991 as a performing musician, he played in various student orchestras, harmony and symphony orchestras, a big band, a jazz octet a dixieland band, and Jurai Stanik's jazz quartet. After having obtained his bass certificate he played with, among others, the Randstedelijk Accompanying Orchestra, the Delta Ensemble, the Dutch Ballet Orchestra, and the Metropole Orchestra, and the musical theatre group Baboing. Thomas' activities cover a broad musical field.