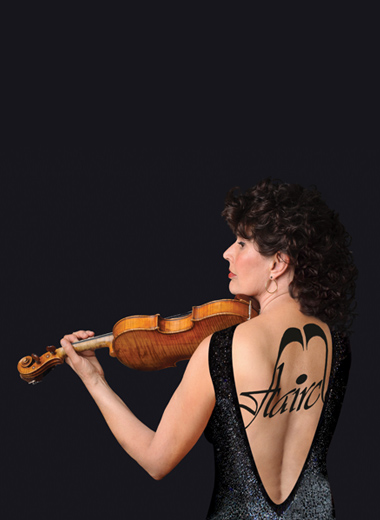 Sylvia Houtzager was born and raised in the city of Delft. As the daughter of an oboeist she was dragged to rehearsals and classical concerts soon after she was born. She received her first violin lessons when she was six. At the age of twelve she went to the Rotterdam Academy of Music, where she combined her regular schoolwork with violin and music lessons. Six years later she became a full time music student and choose the harp as her second instrument. While studying, she worked with several symphony orchestras and as a violin teacher at the music schools of Delft and The Hague.

This passibly regular living came to an abrupt end when Peter Weekers and Erik Visser invited her to join Flairck. The band had just released its first album 'Variations on a Lady' and was seeking a replacement violinist for the band’s increasing schedule.
Sylvia Houtzager played her first concert with Flairck in December 1978. She made her television debut in the first Flairck television special broadcast on Dutch national television on February 6th 1979. The first Belgium and German televised concerts followed soon after that and Sylvia, along with the other three members, became famous overnight.
In 1980, she joined John Denver on his tour of Belgium, Holland and Luxembourg.
When she was not occupied with Flairck, she took on studio work and performed with artists such as Don McLean, Georges Moustaki, Herman van Veen and the Irish singers Gavin Friday and Mary Coughlan

In the eighties, as several musicians joined and left Flairck, Sylvia Houtzager and Erik Visser remained the backbone of the group. In 1984,they developed the first large music theatre production for Flairck, an 'instrumental opera' called 'Bal Masqué', based on a Edgar Alan Poe story, with Sylvia headlining the cast of musicians and dancers.
Flairck remained popular in the Dutch theaters and performed with several symphonic orchestras, both in Holland and abroad. . Houtzager was the driving force behind Flairck's cooperation with these symphony orchestras and she pulled the group in a more classical direction, featuring the violin as main instrument. In the eighties the group traveled frequently to Germany, France, Belgium, Greece, Japan and Indonesia and visited Romania, Australia, Singapore, Thailand, Korea and the USA.
She also took centre stage in the group’s publicity. In 1986 she featured in an ten page photo publication in Playboy magazine. Houtzager became a regular face on Dutch television, a highlight being her performance of the first ever underwater violin recital of a Boccherini minuet.
In 1989 Sylvia Houtzager received the Golden Harp award, Hollands most prestigious music prize, awarded to musicians with both long and succesfull careers. Sylvia showed up in a miniscule top, making it rather difficult for the nervous Minister of Culture to pin the little medal to her clothing. This was a widely covered photographic moment.
In the autumn of 1990, Flairck celebrated twelve and a half years on the road with the double live album 'Alive', which was recorded on tour in Germany, Japan and Holland.
At the end of the 'Alive' tour, Sylvia Houtzager suddenly left Flairck. She married and became the mother of two children.
Sylvia Houtzager stopped touring for several years, but at the end of 1991 she released her first classical solo album 'Die Geige'.
She remained a well sought after studio musician, playing string arrangements on the U2 single 'Please' and many other recording sessions.
In 1995 and 1996, she joined the renowned Gipsy 'Rosenberg Trio' on an extensive Dutch theatre tour.

In the second half of the nineties she developed a number of product presentations for Dutch companies. She perfected the Flairck 'Sleight of Hand' balloon illusion. With her group 'Stringlights', she created a black light theatre performance which featured a string ensemble using fluorescent violins and bows.
Since 1998, Sylvia Houtzager and Hans Bedeker own and run the Highland Studios, where bandoneon virtuoso Carel Kraayenhof and his sextet recorded the 'Guardians Of The Clouds' album with music by Ennio Morricone. During the first decade of the 21st century Sylvia was both a mother and the driving force behind the studio.
When Peter Weekers and Erik Visser approached her in 2013 for a Flairck revival, she barely hesitated: The Lady's Back. 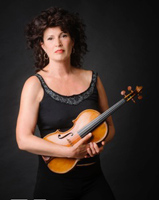 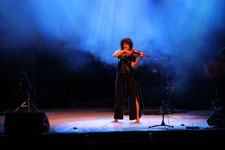 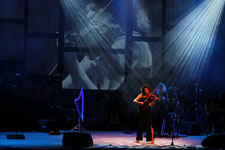 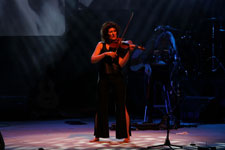 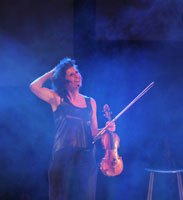