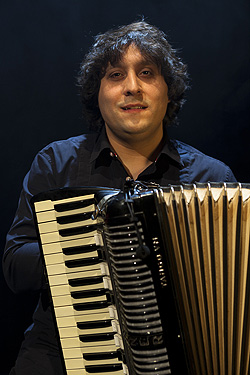 Marius Preda (1977) comes from a musical family. At four years of age he was given a cymbal by his grandmother, and as result became fascinated by the sound of this instrument. On his fourteenth birthday Marius was admitted to the Rumanian George Enescu High School. At about the same time he performed in different orchestras, including gipsy orchestras, throughout Rumania. Two years later, 1993, Marius was invited to the Netherlands to play with different Rumanian ensembles. Here he also made his first contact with jazz music.
In 1995 Marius began to study the vibraphone at the jazz department of the Royal Conservatory in The Haque, where he graduated with distinction and created a CD on witch for the first time the cymbal is played as a jazz instrument. In October 1998 he recorded his first CD, and in the 1999-2000 season he played together with the Dutch group Flairck and later as a soloist with the Rosenberg Trio.